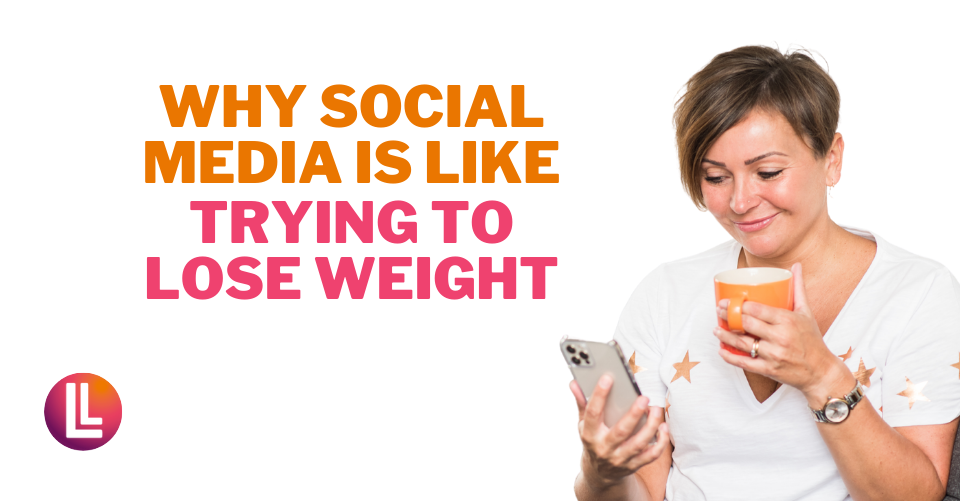 Trying to grow your business using social media can be one of the most frustrating experiences in business. The same goes for trying to lose weight.

You’re doing All The Things, but NOTHING is happening…

I’m going to reframe all of that for you in today’s 15-Minute Transformation video, and show you evidence of why you’re actually achieving much more than you think. (if you prefer to read, keep scrolling)

I put on two stone after my wedding at the end of February 2020, to the end of 2021. I’m not alone in that, but YIKES!!! Thank you marital bliss and lockdowns.

In January 2022, I decided to do something about it. So I cut out the snacks, and started being more mindful about what I ate. And the weight fell off!

But then it stopped being so easy.

That initial buzz of watching the pounds drop off when I weighed myself had worn off, to be replaced by depressing realisation that I had to carry on with this for a while in order to get to my end goal.

It turned out, that although the scales had been a bit stagnant for month two of my weight loss journey, I had lost over five inches in that time.

Suddenly my enthusiasm for the whole thing was back. This was working!!

People’s experiences on social media are often so similar to this. They create an account, start to post, get some likes and comments, get some new followers, see immediate progress, but then….

You have to start repeating your message. Your follower count is crawling upwards. You’re… BORED…

And this is when so many give up. With their diets AND their social media.

But what if you used the social media equivalent of a tape measure and reflected in a more holistic way on how well you were doing?

What if you looked at the comments you had, and noted the specific words used, then created content including these knowing it would resonate with your audience?

What if you looked at which posts got the most likes and repurposed them into new content, such as a video instead of a static image?

What if you looked at ALL the data – likes, comments, video views, shares, story replies, DMs, and, yes, your follower count – and realised that actually you’ve been doing an incredible job?

What if you realised you were closer to your goal than you thought, you’d just been looking at it the wrong way?

Ready to build the business you *really* want?

If you’re nodding in agreement, then come on into my world…

Once or twice a week I email out business tips and actionable guidance – in plain English! – to help you run a happy and profitable business. The emails are always relatable, sometimes quite funny, and might just be the exact thing you need to hear that day to move you forward.

Want a piece of that? Pop your details below…